The Spirit Message of the Bald Eagle 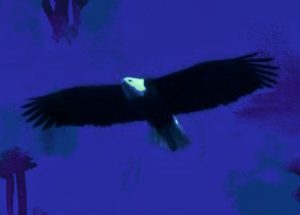 The Sprit Message of

The most amazing thing just happened while I was sitting by the river across the street from the little apartment I am renting in a little town called Bonners Ferry. Just now, a bald eagle caught a big fat fish in front of my face. Yes, I was pleasantly enjoying a calm moment by the river when I noticed the eagle with his bright white protruding head flying towards me in the distance. His determined bold motions caught my attention and distracted me from what ever else I was looking at. He is a very confident creature who knows exactly what he wants.

The eagle swerved around and around above me for a while and then all of a sudden at lightning speed charges down into the river and disappears. I couldn’t believe my eyes. In fact, I was just thinking, wouldn’t it be cool if he grabbed a big fish right now. I have been studying the Native American spirit message of the bald eagle ever since this eagle and I have been hanging out. Witnessing the eagle in full action today was something I have been waiting to see. It further clarified and supported the meaning the natives give but also finally gave me a blog I am inspired to write. Something I have been waiting for, for a while

I first noticed this bald eagle on my first evening walk along the Kootenai river next to my apartment. He was sitting on a telephone post watching me go by. He was just staring at me and I him. The next day, I saw him sitting on a wire that stretches across the river and that is where I mostly see him now. Sometimes, I stop when I see him in hopes of watching him catch a fish but he just stares out into the sky not acting very motivated, so I move on. Once kayaking, he flew straight towards me and swooped above me. I could feel a swoosh in the air above my head as he soared above me. It was a powerful moment, hard to put words to. It felt as though the energy of the eagle far out stretched his body and flowed through mine. Maybe spirit sends you the eagle to impregnate you with a dose of it’s powerful medicine and energy. The kind of energy you want to feel flying through your body. The energy of ascension.

What was so exciting about this experience, wasn’t witnessing such a rare occurrence, but experiencing the raw powerful energy of a bald eagle in close proximity. It took my breath away. After the eagle was under the water for a moment he slowly heaved his body out of the water dripping wet with this slow hard push with his wings. He doesn’t appear to be getting very far and looks as though he is flying in place. The fish is heavy and violently flopping, giving him a very hard time. The eagle drops lower into the water with this calm focus of complete and utter confidence while the water is chaotically splashing in his face. His breast muscles bulging, he knows what he is doing, just getting a better grip. With one more huge push of his wings as hard as he can, he heaves himself and his prey out of the water. With continued determination he relentlessly pushes harder and stronger with his wings steadily until he gains more hight. From the moment he caught my attention to the last sight of him flying off with his fish, this animal was nothing but pure determination.

The message of the bald eagle is one of accession which means mastering the ability to rise above the boundaries or barriers (fears) that holds us back. The eagle was not going to let the weight and the chaos of the fish throw him off his purpose no matter how violent and heavy that fish was. He was strong enough and capable of dealing with the chaos of catching a fish. The eagle was more powerful than the challenges of the situation because he held his focus and was not thrown off by the actions of the fish.

The message of the bald eagle comes to us when it is time to step into our full power and take on what challenges us and not be afraid of what seems to be real. In other words hold faith and focus on the desired outcome despite the difficulties in the moment. You now have the emotional and mental fortitude to transmute negative energies around a situation and shift yourself to a higher state about it. You may have to go through a hard experience but like the eagle if we hold steady and positive thoughts around it, no matter what, we will win. In fact, the situation cannot improve until we learn to transmute the negative energies around the situation to positives ones ourselves.

Often, when we are ready to expand our lives, we have to break through fears and triggers that have stopped us thus far. Even though those thoughts and fears seem very real and hold power over our emotional state we must reduce their blocking powers over us.

Ascension means, although these situations may still cause us pain or fear, we are now emotionally and mentally strong enough to pull and push through these emotional challenges as strong and as tough as the eagle pulls himself out of the water.

When we can hold our focus for a positive outcome about a negative situation, no matter what, or, when we know how to feel good and alright no matter what is going around us, we have ascended. It is a discipline that requires the same determination and strength as a bald eagle uses to catch dinner every single day. When the bald eagle shows up in your life, you are being told that you have the power to transmute a negative situation by holding faith in a your desired outcome and that the story isn’t over yet. You can do it.