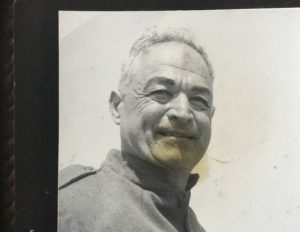 My Grandfather, a WW2 bomber pilot knew his safety and success depended on remaining calm in the face of chaos. He sunk a Japanese aircraft carrier with one bomb. He zeroed in and focused on the smoke stack and nailed it despite all the shooting that was going on around him and at him. He was considered a hero. He was a very brave and strong man. He was fearless, he was balanced and he survived the war. I am sorry this story involves the killing of people however the message is something I believe will help prevent more war, perhaps.

I have a great relationship with my grandfather now and when he was alive. I always felt watched over by him. One day he drove all the way to see where I was living just to make sure it was a safe area. He knocked on my door and told me he was checking up on me and then drove off. I was by his bed side when he died, and I started seeing him in spirit pretty much right after he passed away. One thing he always used to tell me over and over while he was alive, was to remain calm and to relax. The reason he would tell me this over and over, is that I never listened to him. I didn’t understand why that mattered or why it was so important. Well, needless to say he still tells me the same thing in meditation over and over again. Today, I get it though, I instantly calm myself down.

One night in June 1944 I believe in the Pacific near the Philippines. The U.S navy is surrounded by an overwhelming number of Japanese ships. Brutal battle I believe. My grandfather was ordered to take his squadron out to stop them from advancing towards them. My grandfather walked into the hall where his squad was and ordered them to suit up and get in their jets. Everyone of them refused to join him. They believed it to be a suicide mission. My grandfather was furious and told them, as he got into his bomber jet, that when he got back he would court marshal the lot of them. Get back they all wondered? He’s coming back? And he was certain about it. So, they jumped up, grabbed their helmets and got in their jets and bravely flew straight into the face of the danger with him.

At night all the ships turn their lights off for obvious reasons, and they couldn’t use their two way radio either. The U.S ships had all moved so on return from the victorious air battle they could not see where to land. They were running out gas so my grandfather radios an admiral in the us (for some reason I forget why he can) and calls in the damage report. This admiral reports it back to the ships in the Pacific which gives them the knowledge of squadrons success and that they were returning. When my grandfather’s squadron got closer to the U.S ships and because of the knowledge of their victory they knew the jets to be American and so turned all the lights on to safely land the jets. They instantly turned all the lights off again. My grandfather had to land on a mini carrier. My grandfather was right, he came back. He had faith. When we have faith we are relaxed we can see clearly and we are connected to our guides through our intuition. He was balanced which means he was not in fear energy. When we are in faith and in balanced energy we win, we survive and actually even better we thrive.

Veterans day and the synchronicity of it being on 11/11 tells me that the divine was present in the victory or in the ending of the war, divine intervention. The number one means spirit soul or God or Source. So all those elevens means align your soul with God’s soul. When we align with the power of Source we can pretty much over come anything because we are then relaxed and in faith energy. In peace and in faith energy we resonate at the frequency that attracts abundance. So on behalf of my grandfather let’s stay calm and in faith energy so that we can turn our world around.