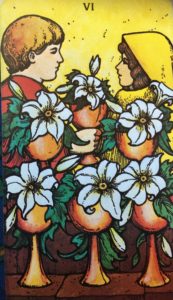 I have been having a very interesting time going around giving free tarot reads to random strangers while traveling on my road trip this summer. Sometimes, I would get calls from friends, clients and family members for a read. So, often when I stopped for lunch someplace, I’d pull out my cards and give them one. Well, an interesting thing kept happening. Time after time waitresses or random strangers would approach me asking if I could give them a read afterwards. I would always oblige, sit them down and give them one.

One of the best things about giving tarot card reads is that you get to have deep and meaningful conversations about some of the most important things with complete strangers. The cards never lie. The cards always cut to the chase. It seems as though the sprits know they have a small window of opportunity to communicate the most important info so they tell it raw. After giving what seems like a thousand card reads I have discovered that both spirit and querent all seem to want to talk about the same thing, love.

I gave a lot of reads in all sorts of places, coffee shops, bars, once on the counter of the gift store and once to a drunk country man on a porch in the woods. I found myself spending a lot of time balancing the cards on some uneven surfaces trying to give instant impromptu reads. (All innocent 🙂 After a few days of this I started to notice a lot of the same repeat cards showing up in the same section of the spread, the divine section. I got to wondering if I wasn’t being used to spread some sort of a certain message. Time after time I found myself telling the querent to seek divine partnership, or to wait for true love or choose from the heart. Seriously, it was insane. They or I would pull the divine partnership six of cups card over and over again and it would land in the what does the divine want you to know section of the read. I asked them if they knew anything about twin flame as they had pulled the twin flame card. I would tell them the universe wants to unite you with your twin. I kid you not that card would show up sometimes three reads in a row in the exact same divine section of the spread. Everyone one saw it. Peoples jaws dropped. I often would back track and question wondering what had made me stop in that restaurant or coffee shop after some of those experiences.

One time I was at a restaurant in Idaho and a beautiful young waitress shyly strides over to my table after I had given a phone read for someone. I said sure sit down. Well, of course she pulls the twin flame card and it lands in the divine advice section of the read. I ask her if she knows anything about twin flames? Her eyes open wide, and she says she had read about it a few years ago but didn’t know if she was supposed to have one or if she got to have hers or not. I told her apparently you do and you are supposed to unite with him soon. I asked her if she knew of anyone whom she thought it could be. She instantly knew and smiled but then hesitated. She told me that she had other nice men she liked too. I interrupted her loud and clear. I let her know that a beautiful woman like her has the pick of a lot of very handsome and successful wonderful men, but those relationships don’t last. The only relationship that will last for you is the one you choose from your heart. She stared at me for a moment in silence and she told me chills ran through her body. She got up and ran to get her friend after asking me if I could give her friend a read as well. That was the first time I got the twin flame card twice in the same section two times in a row. Her friend got a similar read but informed me she was a married woman. I informed her that she did not mention happily. I then asked if there was romance love and passion or something alive in her marriage still as the card read said things looked pretty distant. She told me, no, nothing seemed good.  They gave me a free lunch. It was fun.

I gave a read one day to a rugged drunk country man on a dirty porch deck in the middle of the woods . He was drunk trying to escape the depth of the pain he was experiencing from his break up. The cards wanted him to know it was true love. Something he hadn’t really stopped to think about but admitted it was true and he lightened up a little.

I have many stories like these. The last time this happened, quite recently in fact, I gave a woman a read in front of a sceptic. I never have a problem with skeptics, I’m fine with it but I was telling them the story of my road trip and how often I would pull the divine partnership card in the reads over and over again in the same section of the spread. Well, I gave myself and the woman a read and that card showed up for us both. It also showed up on the random third read as the first card and I had shuffled the cards really well before each read. They saw it with their own eyes. They knew I couldn’t have faked that. I was even amazed. In fact experiences like those have completely and solidly put me in the firm belief that it is better to remain single than waist time in a relationship that is not based in love as it will only crack and break in time. The only relationships that stand the test of time are the ones that are based in true or divine unconditional love. Most people I gave reads to had very little knowledge of the existence of such relationships.

The more tarot reads I do the more I hear the repeat message from the divine which is pretty much that, no matter what your problems are no matter why you think you suffer the divine calls you to follow your heart or to align with love to find your solution. Relief is in the love in the heart not the fear in the head.

Read after read in the divine guidance section I get cards that steers people to their hearts desire so much so sometimes now I don’t even see the point of pulling cards. Sometimes, I just tell people, don’t worry, sit silent someplace and listen to your heart. You know, follow the love because anything else will just fade.