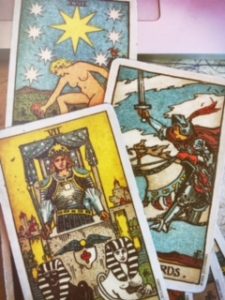 It was a fun week giving reads and being the messenger of some pretty cool spiritual advice. Stuff I can always hear as well.

One night, towards the end of one of the parties, one woman flew at my table and sat next her friend she sent my way after her a read. She watched the read for a while and lit up and said, “I get it, I get it, I understand what the cards are telling everyone, live your passionate life, your true hearts desire, you can, you are supposed to.” Her face was on fire with an explosive sudden passion for life. I’m telling you she was a different woman from the woman I had just given and a heart provoking read to earlier. She asked me how I had the endless energy to do so many reads. I told her, I am living my true hearts desire, my purpose, my most passionate life. “It ignites me to ignite you.” I have endless energy for it because it recharges me as I am servicing the greater whole with the gift I was given to service it with.

Most people I give reads to at parties have not had reads before. I actually think it is important to be very selective with who you take reads from. Staying positive and away from fear consciousness is key as fear is not something the spirits want me or others to feel at all. The cards will always inspire you to live your hearts truth, which we block with fear. Those dark cards show up when you are blocking your natural destiny which the universe may force on you in some way you may not like. Those dark cards can be your best friend sometimes when you need to be aware of a truth you are denying yourself.

The cards want your life expanding. They don’t care how old you are. Some of the most fun reads I give are for middle schoolers. I am always blown away by how important the cards feel about everyone’s situation no matter how big or small the person is. The high earning psychologist’s messages was just as important for the cards to communicate as the message to the middle schooler. The middle schooler was sad because he couldn’t afford to have something he really wanted. Man, did his cards slam all over that thinking. You can always have anything you what in life. Rake leaves, help your poor over burdened mom in some way, she needs it.  The cards wanted him to go for it. He flew out of his seat after his poor mother to work something out with her.

That night was very windy so the card reading moved into the kitchen, which is actually the best place to give reads as it is the heart of the house. Every time I do a party, towards the end of the party a large group tends to gather around the table. When everyone, who has had a read, realizes that the reads are deeply thought provoking and invigorating, people become curious to see what messages the others are getting. When people realize that tarot card reads are safe and non judgmental it frees people to drop their walls and reveal their struggles. We realize we are not alone which bonds and unites us. I know as a card reader, that every single one of us, is struggling with something they could use a little spiritual elevating over or some fear relief about. I guarantee it. GO FOR IT!

Lots of Love. Hope you are ignited. <3